Posted by ilprep on March 8, 2013 in Uncategorized

The Brown Franchise will be on display in NYC/D. Antoine-Pierre photo

This weekend may pale in comparison to the “Super weekend” that last weekend was, but it will be big on a few fronts.

At home here in Illinois is a slate of quality invites.  Friday evening will kick off the Dan Phillips Invite held at the refurbished Evanston Township High School field house.  The Phillips Invite is mostly a relay meet with an assortment of unconventional events.  As for the all boys meet namesake, it is named after esteemed former Evanston educator Dan Phillips.  Mr. Phillips became the first African-American to serve as Evanston HS board president in 1969. 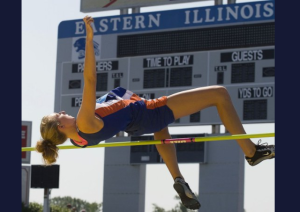 Kandie is the top jumper in the state

The Eastern Illinois University High School Girls Invite hosted by Charleston HS will be the biggest meet in central or southern Illinois this weekend.  Although the quality of the meet has dropped a bit because of athletes being allowed to compete in indoor nationals and some other meets popping up, the EIU is still a find.  Look for one of the nation’s best athletes Kandie Bloch (Sr., Argenta-Oreana) to make a huge debut statement in the high jump.  Bloch jumped 5-10 last season that ultimately boosted her to US#6.  Bloch has improved her offseason work ethic under the tutelage of her aunt Karen Bloch, who served as the Team USA Men’s and Women’s water polo trainer in the 2012 London Olympics.

The 3rd Annual Proviso East Lady Pirate Invitational will highlight the top all girls invitational in the state.  Defending three-time 2A state champion Springfield Southeast will finally put their “A” on display on the fast Proviso West field house track.  Watch out for defending 100m and 200m state champion Charday Crawford to run off some winter rust- at the expense of her foes.  She will be entered in the 55m and 200m as of now.  Perennial powers E. St. Louis and Chicago Morgan Park will also be in the house for a possible pre-state preview showdown.  Bolingbrook, Chicago (St. Ignatius), and Frankfort Lincoln-Way East “B” will provide a few fireworks for the faithful.

Preview meet to show.  The Tigers should see the likes of Naperville Central, Crystal Lake Central, and Hononegah.  On the boy’s side, Belvidere North will be the major squad to watch.  Tyler Yunk and Garrett Lee will serve as the main attractions for the Blue Thunder.

NEW YORK–
The Illinois travel party that is headed to New York City for the upcoming New Balance Indoor Nationals will be exclusively girls. Frankfort Lincoln-Way East will have the center stage with all eyes back home watching.

Outlook: Aaliyah Brown will serve the role of the “Franchise” here as she is entered in three events: 60m, 200m, and 4x200r.  The Lincoln-Way East brand will only be as prominent as she will.  The fact that some media outlets have failed to mention Brown or her mates will undoubtedly come back to bite them hard like a rabid dog.  Consider the fact that she is ranked US#1 in the 55m, US#3 in the 60 (7.34), and US#8 in the 200 (24.58 ran back in January).

The critics and fans will be keeping an eye on the 4x200m relay championship that will take place on Sunday.  The Griffins will first have to get past US#4 Swenson Arts and Technology out of Philadelphia PA.  The key to moving on should be a cinch as long as the first two legs don’t get into transition issues where heavy traffic is likely to occur.  The Armory track is banked and ultra fast and that could cause a few problems.  However, Coach Angelo Brown insists his team has solved the troubling hand off exchanges that cost them at least a second at last week’s Downers South Mustang Relays.  “I still like the blind handoffs… [but we are going to go with] open handoffs,” said Brown.  This is a smart move considering six of the top ten relays are slated to compete in NBIN.  An excited Brown added: “We are the track assassins come this weekend.”

Sarah Bell will compete in the pole vault and it should be a dandy for the 4th ranked senior.  If you recall last year, Bell was Co-US#1 at the end of the indoor season.  She was not allowed to compete in the NBIN in previous years because of state sanctioning rules.  This time she will be able to battle against US#2 Texans Lakan Taylor and Annie Rhodes.  They come in with great 13-6 clearings.  Bell has topped off at 12-10 so far.

Shamier Little will not run her signature event the 400 this weekend.  Instead the Texas bound AM superstar will contest the 60HH and 200m.  Little is no slouch in those events. She is ranked US#10 in the shorter 55HH and US#11 in the short dash.  Little will have a challenge in making the finals in both events, but she should be able to move on to the  next day.