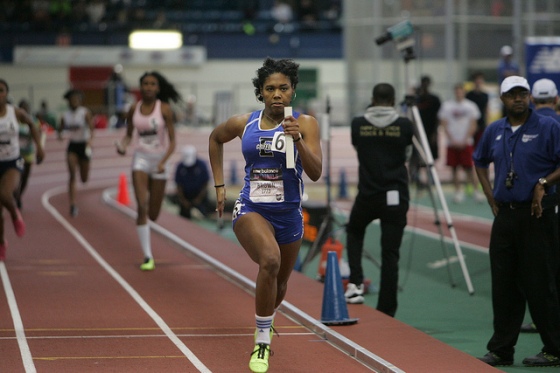 The tension is building every weekend and the one that just past was no exception.  With tremendous action happening on the east coast at the New Balance Indoor Nationals, and here statewide there is more than enough to keep you track fiends settled down.

It probably should be fair to include Luke Winder (Jr., Plainfield Central) in the weekend track notes.  He won the pole vault in a family personal best effort 16-5 at the Wheaton-Warrenville Quad on 3/7. His mark is US#8/IL#1- only Mitchell Erickson (Chicago Heights Marian Catholic) and his 16-8 stands in the way as the state’s all-time indoor mark. Winder’s older brothers Jake and Josh were also outstanding vaulters in high school.  Their father Tim was the 1979 state champion while competing for Woodlawn, IL.

York Girls Invite: Coach Annette Schuette and her staff have produced a ton of quality meets this indoor season and this last installment was no exception.  Palatine head coach Joe Parks unleashed his “A” team 4x800m relay and produced the state’s top mark of 9:34.55.  The line-up of Cassidy McPherson (2:23.xx), Kara Burton (2:25.xx), Tess Wasowicz (2:19.xx), and Liz Cox (2:26.xx) served notice to the rest of the state that they should not be forgotten in state title talks.

Plainfield South Girls Invite: The very youthful Skyler Bollinger from Yorkville pulled a sneak attack on the state by producing the second fastest 3200 in the state thus far this season.  The precocious Freshman shocked the field as well as many onlookers when she hit the gas a bit hard with an opening 5:07 first “mile.”  However, she remained well ahead of the field and strong enough to finish off a blistering 10:36.0.  The Foxes have a potentially awesome 4x800m relay team to boot down the road.  The question for the Yorkville coaching staff is will they be able to make an all-state run without Bollinger?

Dan Phillips Relays: This annual boys track meet held inside the Evanston HS field house was greeted with a new surface that produced some quality performances around.  The host Wildkits won the note worthy 4x800r in 8:20.0.  Also, the promising Peter Cotsirlos (Jr., Winnetka New Trier) returned from injury that sidelined him during the cross country season.  He easily won the won the 1600 in 4:28.8.  Head cross country coach and distance coach for track Dave Wisner appeared very pleasant of his team’s progress. “We don’t usually take indoor [season] very seriously. We just want get through this and on to the outdoor season.” But there was another all-state runner in the house.  Billy Bund (Sr., Lake Forest).  The University of Michigan bound standout was sidelined with a stress fracture in his foot.  Word is he will not be out the entire season. 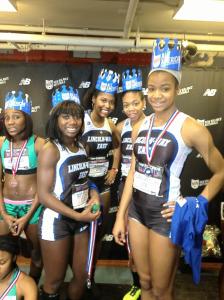 New Balance Indoor Nationals: The main attraction of the weekend took place in New York City at the famed New Balance Track and Field Center at The Armory (actually located in Spanish Harlem).  A small but powerful contingent traveled to NYC to get a taste of the nation’s best athletes.  Frankfort (Lincoln-Way East) girls had everyone’s attention back home- and they were watching.  It would be a long but profitable day for Aaliyah Brown (Sr.), Asia Brown (Fr.), Alexis Hyshaw (Jr.), and Alexis Antoine- Pierre (Fr.).

Lincoln-Way East got their day started with a bevy of individual races from the emerging elite to regular ones.  Aaliyah Brown was the featured one and she open her first 60m with a 7.59 heat winner.  She later ran 7.46 in her semi-final to cop the top seed for Sunday’s final.  Then it was off to run the 4×200 relay prelim.  It was mentioned in the weekend preview that the Griffins drew US#4 Swenson Arts and Technology of Philadelphia PA in their heat.  No problem.  The Griffins dusted off the Lions nicely easily winning their heat in 1:39.98 to become the first Illinois girls team to break 1:40 indoors.  The previous best was Evanston (1:40.68). Brown clocked 24.20 for her anchor leg.  It was interesting to see the girls’ rock and roll like veterans and keep themselves out of the dangerous traffic that legs one and two often present.  Now, it’s on to the finals now…

Brown has picked up the moniker ‘The Franchise’ because she has willingly carried the team on her back for four years. So, it was no surprise to see her entered in one more event, the 200.   Brown won heat 7 in 23.98 and advanced to the final with second place finisher Tyra Lea of Wakefield, NC.

Shamier Little (Sr., Chicago Lindblom) has been running well this indoor season in a variety of events. In her last competition two weeks ago, she finished second in a then US#2 400m (54.65) to national leader Precious Holmes (Hillhouse, New Haven CT).  But on this occasion, her coaches thought it was be best to run the 60HH and 200.  Little advanced to the final in the hurdles with ease clocking 8.73 and 8.61 in her first prelim and semi-final races.  The 200 prelim didn’t go as well despite running an indoor personal best 24.68- good for US#16. Ms. Little finished 12th in the prelims- only the top eight advance to the finals.

E. St. Louis Sr. won the team title with 59 points to Springfield SE’s 55.  But the major story was star Charday Crawford.  She was supposed to be the workhorse for her Spartan team.  She won her heat of the 55 dash and entered the finals as the top seed.  But it appeared as though something was wrong with her foot.  She tried to walk it off and eventually did but it was not convincing.  She didn’t talk about it either.  Back to the final about an hour later, Crawford placed a lackluster fourth in 7.32.  Something was obviously wrong with Crawford.  Although she later led off the 4×200 relay for her team, it still appeared as if things were not right with her.  She later scratched from the 200.  No apparent reason.  Maybe it is just precaution.  Maybe not.  Perhaps we will know what’s going on down the road to state.

There were no issues with Crawford’s teammate Brion Portis.  The senior produced the state’s best mark in the triple jump leaping 38-7.5.  The mark was an indoor personal best.  Earlier in the meet, she placed second in the long jump to winner Aliyah Harmon (Sr., Olympia Fields Rich Central).  Harmon was victorious in 18-3, but she had to earn her gold medal.  She started with two fouls before connecting on a 17-7 mark, and then her best effort on the final attempt. 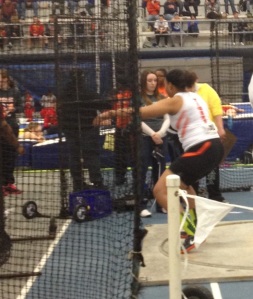 Charleston EIU HS Girls Invitational: This meet used to be a main attraction for many teams from the Chicago area.  The chance to run in a college environment was a good appeal such as Eastern Illinois University.  However, teams began to look for meets closer to home in recent years.  So, leave it to teams like Edwardsville to make Charleston their palate. The Tigerettes won the meet but Emmonnie Henderson stole the show.  The University of Louisville bound Henderson set a personal, field house record, and all-time indoor best 48-9.  It is also the second best throw in the country, and frightening bad news for her foes.  Henderson is just two weeks removed from the basketball season.  Her teammate and protégé Aaliyah Covington (Jr.) threw the third best mark in the state 44-6.

New Balance Indoor Nationals: The final day of competition would be the moment of truth for Coach Angelo Brown and his Lincoln-Way East girls’ team.  The success of the Griffins would mean real respect for the state of Illinois going into the outdoor season.  As well, the self imposed title “track assassins” would be fitting.

The first final of the day would be the 4×200.  What would the order be? After Saturday’s prelims, Coach Brown indicated that he and his team would review the tape and decide on what to do for the final.  It should be noted that a suggestion was made several days ago to switch the order if the quartet made the final.  Aaliyah Brown was moved from anchor to second leg.  This would be a smart move to avert any congestion issues during the first transition.  It worked as Aaliyah was successful in getting a clean exchange from Hyshaw.  Aaliyah got moving well but drew the nation’s top 300m sprinter Kadecia Baird (Sr., Medgar Evers HS; Brooklyn NY).  Aaliyah could not corral Baird and settled for second.  Her sister Asia took the handoff and motored hard around the banked turn, but was overcome by Wakefield NC.  Pierre-Antoine held her ground on anchor with a 25.53 carry that produced another all-time clocking: 1:39.51.  The foursome from Illinois undoubtedly earned the respect from their peers at NBIN.  And hopefully from everyone from afar who may have overlooked them.

“The Franchise’s” day was not done.  She still had the 60 and 200 finals to run.  The favorite and US#2 Kali Davis-White (Boyd Anderson HS; Ft. Lauderdale FL) false started.  Aaliyah got out of the blocks fairly well and moving strong down the homestretch.  It wasn’t until the very end that she was nipped by Canadian Clemence Paiement (Vainqueurs Plus; Quebec) 7.40-7.41.  A tired Brown would come back in less than an hour’s time to run the 200.  She competed as hard as she could, but it was very clear that she was out of gas from a weekend long of tough competition.  Still, the Franchise was able to earn a much deserved fourth place in 23.94

Little completed her NYC experience with a third place finish in the 60HH blitzing a personal best 8.55.  Little completed her objective of improving her speed and hurdle technique against the nation’s elite.  She also set an Illinois all-time best 7.94 55HH enroute.  This is faster than the 7.96 the immortal Shalina Clarke of Evanston clocked back in ’06.

Sarah Bell (Sr., Bloomington Central Catholic) closed out the Illinois experience by earning All-American honors with a sixth place in the girl’s pole vault.  Bell managed to get through her opening height 11-7 with minimal resistance.  She then passed on 12-0.75 and moved on to 12-4.75.  Bell cleared it her first try.  It was on to 12-8.75 and she was up and over with just one miss.  The next test would be 13-0.75. If she got over this hump it would be a new indoor personal best.  It would also top her US#1 best of 13-0.25 from last year.  However, it was not to be on this day.  Bell missed on all three attempts and settled for the hexagon position.