Posted by ilprep on February 17, 2013 in Season Previews

When it comes to big league relays things can be fierce.  Over the past several years Illinois has made a name among the national conscious.  For example, Wheaton-Warrenville South and Glen Ellyn (Glenbard West) proved that a friendly rival can produce dividends for all.  It produced a state record and national spotlight for the land of Lincoln in 2012.

Relays can also be used as a prop for coaches to lull their competition in for other causes.  For years, teams like E. St. Louis, Chicago Morgan Park, and Evanston would use relays in their quest to win a state championship.  Sometimes the tactics worked and sometimes it didn’t.  The 800m medley was an event that smart coaches with deep pockets would use as a throw away event.  To them it didn’t make sense to run their best athletes in an event that would tax them too much later.  Evanston coach Fenton Gunter has always felt that using a top 400 runner on a medley would kill that athlete’s ability to perform up to standard in other events later.

For a team battling for a team trophy, quick decisions have to be made.  Remember that relays only count for 10 points in Illinois- not 20 as they do in Texas.   But then again that same runner could also be used to bait other teams in thinking they will be spent on a relay when it isn’t true.  But remember that every quality sprinter must be able to run the 4×400 relay.

4x800m-
2012 State Champion: Wheaton-Warrenville South 8:59.03
Key returning teams: Wheaton-Warrenville South, Glen Ellyn (Glenbard West), Mt. Prospect (Prospect), Palatine, Downers Grove North, Yorkville, Naperville North, Park Ridge (Maine South), LaGrange (Lyons Twp.), Chicago Lane Tech, Elmhurst (York).
Outlook: DEEP, DEEP, DEEP is the only way to describe an event that returns as one of the deepest in the country point blank.  Of the 12 teams that made the state finals last year, 11 of them realistically could make it back to compete on Saturday’s final.  For starters, let’s take a look at Wheaton South and Glenbard West.  These two amazing teams return three starters from last year’s record run including both anchors McKenna Kiple (Sr., WWS) and Emma Reifel (Sr., GW) to relive their crushing 2:10.5 and 2:12.7 legs.  The end result produced US#1 and 2 marks at the time.  It was also the fastest field in IHSA history.  The Tigers were the first team in state history to break 9:00… Prospect had the rather dubious distinction of being the first team in IHSA history to break 9:10 and not win a state title.  The Knights ran a blazing 9:06.18 but only earned third.  They could potentially run faster this year and still suffer the same fate.  One thing is for sure, Lauren Poplawkski (Sr.) will be there to hold things down for her team… what is Palatine going to produce this season?  The Lady Pirates thought pattern has always been to let the other teams build their confidence and run fast times during the early season.  Suddenly, like a piranhas attack the Pirates devour their opponents.  It almost happened in last year’s final when second leg Tess Wasowicz (Sr.) raced out to a big lead that surprised the field.  However, the lead was short lived and Palatine faded to 4th in 9:15.36.  The Pirates return all four piranhas this season.  Keep an eye on the ’11 winner Downers Grove North.  The Trojans have enough back to make a solid run at the top three honors in May.

4x100m-
2012 State Champion: Bolingbrook 46.58
Key returning teams: Frankfort (Lincoln-Way East), Rock Island, Belleville West, Evanston, Naperville (Neuqua Valley), Gurnee (Warren), Homewood-Flossmoor.
Outlook: Bolingbrook is going to have a nearly impossible challenge in being one of the top tier units after graduating three legs including the ace Kim Azie, now competing for the University of Wisconsin.  This now means that Lincoln-Way East rises back to the top of the class.  The Griffins are led by the supremely talented Aaliyah Brown, who anchored her team to a state title in 2011.  There is a strong sense of confidence in the air for the team that hails from the southwest Chicago suburb of Frankfort.  That feeling is the all-time mark of 46.23 set by E. St. Louis Sr. in 2008.  Assistant coach/speed coach Angelo Brown has not been shy about his thoughts on producing fast times.  “I think we can get that [state record] this year.  Why not? Records are made to be broken,” he said several months ago. “We will be going to some great meets like the Texas Relays and Penn Relays, so we will see how good we are.” If teams like Rock Island, Belleville West, and Evanston hope to contend, they may need to move around some personnel to enhance their chances of being viable in May.

2012 State Champion: Belleville East 1:39.77
Key returning teams: Belleville East, Rock Island, Romeoville, Plainfield North, Bolingbrook, Frankfort (Lincoln-Way East).
Outlook: If there is an event where any given team can shine or become a point stealer this is it.  The 4×2 is sandwiched between the 800 and 400.  Most girl coaches will not gamble with their best 400m specialist here.  Instead it is an opportunity for coaches to use the depth of their team.  They will mainly use second team 100/200 sprinters.  Of course in relay meets the best teams will prevail, but at the conference or state level it will be team depth that rules.  Belleville East was a team that benefited from Evanston and Lincoln-Way East using their key athletes elsewhere.  That might not happen this year because of personnel changes.  Evanston is considering moving emerging star Parker English (Jr.) from the 400 to the 300H.  This will give the Wildkits more team options to use English in relay races.  Lincoln-Way East will usher in new blood Alexis Hyshaw (Jr., transfer from Naperville North), Asia Brown (Fr.), and Alexis Pierre-Antoine (Fr.) strengthen their force among the state’s best… Rock Island ran well in last year’s state championship placing third will return three legs and best leg Mystique Thompson (Jr.).  Thompson could be moved to anchor to replace the graduated Trineisha Gray. 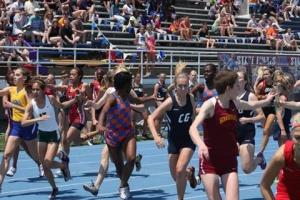 4×4 will be spread evenly this year/Bob Geiger photo

4x400m relay-
2012 State Champion: Belleville West 3:50.67
Key returning teams: Frankfort (Lincoln-Way East), Evanston, St. Charles East, Crete-Monee, Springfield, Belleville East.
Outlook: The showstopper will once again be an event to watch out for because of the unlimited amount of fun, excitement, and unpredictable outcomes that exist here.  Belleville West ran away with the state title with ease over Lincoln-Way East last year.  With the departure of Jessica Oranika, there will more than likely be a new champion.  It’s starting to sound like a broken record but Lincoln-Way East is once again in the catbird seat.  If things shake right they could rule this event with a time in the 3:40s.  Aaliyah Brown of course would have to be on board.  Evanston has won this this event more times than any team in state history.  The Wildkits will have some unknown talent lurking behind the scenes, but they will have Parker English in tow to save the day.  Regardless of who are the favorite teams, the showstopper will be the one event to get fans, coaches, and athletes excited for.