Posted by ilprep on February 26, 2013 in Meet Coverage 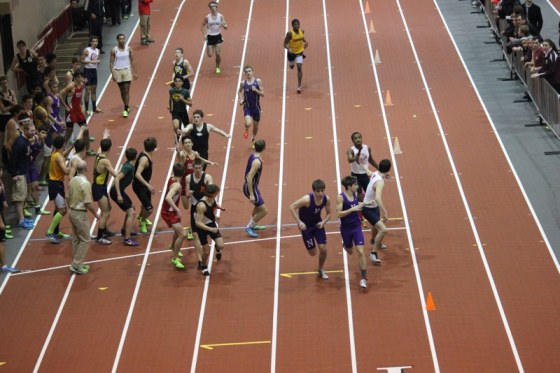 Lincoln-Way East girls almost pulled off two meet breaking feats last evening inside the cozy North Central College Recreation Center for the Mustang Relays Monday evening.  The Lady Griffins broke one record and won another one in easily besting their competition.  The Minooka boys got revenge in winning the 4×4 after a so-so 4×8 performance.

The ‘Brown Franchise’ arrived back in Chicago from Seattle WA, at approximately noon on Monday.  Aaliyah Brown and her father Angelo Brown were at the Brooks PR Invitational participating and partaking in one of the nation’s premier high school events.  They would not disappoint there nor would they let down the faithful here.

The Minooka boys relay squads came in the vision of winning two of the three events.  They would have to wait over two hours before getting redemption in the harder to win 4×4.  The Indians would get the job done and leave Naperville with many happy faces.

Yorkville did not waste any time in getting established.  Freshman Skyler Bollinger got the lead off chores and immediately stormed out fast and was surprisingly not challenged when she hit the 600m mark.  The chase pack consisted of Prospect, Lake Park, Whitney Young, and Lane Tech among the scrum.  Bollinger was able to close out her leg in a smooth striding 2:19.5 and well ahead of Prospect and Lake Park who crashed home in 2:23.5.

Casey Kramer was next up for the Lady Foxes and she continued to accelerate away from the field.  Meanwhile, Lane Tech’s Joanna Podosek began to get her team back in the race with a strong opening 400 that moved the Indians into third place.  As she passed Lake Park and another team into second for the exchange, Yorkville had already sped off for their third exchange.

Kelsey Leedy had one job to do for the Lady Foxes.  Do not get caught.  She did not get caught and even tacked on more deficits for the Indians.  Lane Tech separated itself from Naperville North and the chase pack with Alex Martel in the driver’s seat.  It appeared as if the race was well in hand for Yorkville because Leedy refused to come back.  She handed off to Bri Stuepfert and it was a wrap.  Stuepfert completed her tour of duty in 2:25.7 and home to victory.  Lane’s Jackie Bynes, who is fresh off of the basketball season, holds on for her team to earn a hard fought second against the hard charging Kaylee Flanagan of Lake Park.

4×200-
Frankfort Lincoln-Way East 1:41.85
Plainfield North                       1:45.58
Bolingbrook                              1:46.55
Summary: If the NCC building had been Las Vegas then bets would have been taken.  The #1 transaction would be the margin of victory the Griffins against the field.  It almost didn’t occur because of very critical and concerning handoffs for the first two legs.  The leadoff runner saw Alexis Hyshaw motor out to a great start and clear of the field.  But as she approached her teammate Asia Brown there was confusion in the pair exchanging the baton- that it was almost dropped.  Even worse the momentum was lost.  Brown was able to reboot and regain the lead against Plainfield North.  Still, another mishap between Brown and Alexis Pierre-Antoine nearly resulted in a drop.  Again, Pierre-Antoine’s speed and poise moved the Griffins ahead.  Finally, the anchor exchange to Aaliyah Brown was solid and it was all she wrote.  “The Franchise” brought the baton home with a sizzling 24.7 split and smashed the previous meet record of 1:42.96 set by Bolingbrook last year.  Afterwards, there were many what ifs instead of smiles.  Coach Angelo Brown said it was the first time this season his team has competed as a unit.  In fairness, stick play is about familiarity and chemistry.  None of the four relay members have ever competed together as a high school quartet prior to Monday night.  The next goal for the Griffins has to be to work on transitions and handoffs if they expect to be among the nation’s best next month at the New Balance Indoor Nationals.

The main prize started off fast as it seemed like the entire field was bottled necked together through the first 200.  It appeared as if the pushing and shoving and course spiking and baton poking would continue for another lap.  Finally, St. Ignatius’ prized distance runner Jack Keelan gets it going and moves out on the final lap and brings his teammate Chris Korabik the baton first in 1:59.3.  Sandburg closed hard as well with Dennis O’Callahan’s strong 1:59.6 carry.  Still, St. Ignatius would not be denied with Korabik rolling hard on the first rotation.  He continued his assault on the track despite Sandburg’s Radke chasing hard.  West Aurora got into the sweeps along with Chicago Lane Tech’s Pavlo Hutsalyuk.  The race had once again become a tight tilt.

The most important leg of the 4×8 is the third leg.  It’s where teams make or break their chances of winning or losing.  St. Ignatius ran low on gas with the freshman Danny Santillo.  Santillo didn’t run poorly with his 2:03 split; he had to make a path for the more experienced Sandburg and West Aurora guns- Matt Hetzler and Brandon McKay gave their teams the anchor advantages.

Sandburg did not have their ace Pat McMahon.  McMahon was on a recruiting trip to the University of Notre Dame.  Nick Prajka would be assigned the anchor role.  He handled the duty with honor as he moved to catch West Aurora’s Alan Martinez who was leading.  The atmosphere was abuzz with coaches lining the turn of the track shouting commands to their athletes.  Finally the gun lap was sounded with West Aurora and Sandburg still leading.  Martinez was holding on to a slim lead but Prajka maintained his poise in eating up the track.  Martinez began to tie up on the homestretch and with just a few steps before the finish line, Prajka squeezed past for the thrilling victory.

4×200-
Chicago Heights Bloom     1:32.19
South Holland Thornwood 1:32.69
Orland Park Sandburg        1:32.82
Summary: The moniker in the 4×2 is to never count the eggs before they hatch.  No, there weren’t as many mishaps and NASCAR crashes as in the past, but there were a few disqualifications.  The major violation occurred in the championship heat with apparent winner and would be state leader St. Charles North in 1:31.9.  The North Stars’ second runner Grant Loess made his cut in too soon and was signaled for the infraction.  Loess will take this matter as a serious learning tool.

Grant Nykaza-
Beecher senior star Grant Nykaza did not embarrass himself or the hosts in achieving a goal that he set for himself in order to compete in the Prestigious Arcadia Invitational in April.  It was approximately one month ago that Nykaza asked this writer about competing in a meet so he could achieve the 9:15 mark required to run at Arcadia.  We both started a statewide search for very competitive races.  Unfortunately, we could not find any suitable ones.  It was understandable that some meet directors did not want an individual competing as an exhibition runner in a team scoring affair.

So the thought of Nykaza running solo in a relay race came to mind.  I remember seeing Dathan Ritzenhein run against a relay team in Michigan- and beating the field.  I thought it would be cool and also an opportunity for Grant to achieve his goal.  The Mustang relay meet officials agreed to the demand and the rest is history.  Congrats to Grant Nykaza for running 9:14.37 and reaching a milestone in his young career.