Posted by ilprep on February 22, 2013 in Season Previews

Despite a reduction of top talent due to graduation, the distance arena will still be the crème de la crème in Illinois track and field land.  The face cards have changed and new leaders will emerge from last season to cross country and finally through the winter training prologue.  The three events: 3200, 800, 1600 should exhibit some very solid performances throughout the year.  So, it would be wise to keep an eye on the form charts from the indoor season to outdoor as they will change a bit.

Jack Keelan ( Sr., Chicago St. Ignatius) win or lose be the man with the bullseye on his chest after running an astonishing 8:55.86 3200m last year at the Arcadia Invitational.  He followed up matters by surprisingly blitzing a solid field in the state championship in one of fastest winning times in Detweiller history (14:05).  What more can he do? Stay tuned!

3200m-
2012 State Champion: Malachy Schrobilgen (Oak Park-River Forest) 9:03.42
Key returners: Jack Keelan (Sr., Chicago St. Ignatius), Tyler Yunk (Sr., Belvidere North), Andrew Philipose (Jr., Arlington Heights Hersey), Quentin Shaffer (Sr., Mt. Prospect Prospect), Martin Martinez (Sr., Gurnee Warren), Scott Milling (Sr., Elmhurst York) .
Outlook: If one is to go off of trends from the most recent results (2012 state xc finals), then there should not be many questions regarding who will be the top distance personnel returning to form in this event.  Keelan, Shaffer, Riba, and Milling have to be at the top of the food chain.  All four standout runners competed in a national cross country championship race this past fall.  Keelan, Shaffer, and Riba ran in the Nike Cross Nationals.  Milling ran in the Footlocker Championship.  Patrick Perrier (Jr., O’Fallon) was ommitted by choice  but he also competed at Footlocker.  But he may have different options this spring than his senior counterparts.  The 4x8r and 1600 appear to be likely scenarios for him, but he can run the deuce and be very successful at it.  There are a few question marks that need to be answered though.  Will Philipose re-emerge and become the force that he was during the track season after enduring an average cross country season?  Will Zach Smith (Jr., Downers Grove North) continue his rocket ship rise?  Smith virtually came out of nowhere last year to place 8th in cross country state.  He has now become a threat here and 1600.  What about Jesse Reiser (So., McHenry)? This kid has come out of nowhere!  We didn’t mention any York Dukesters here but watch out for a slew of depth that they have… and finally… don’t ever sleep on Billy Bund (Sr., Lake Forest).

800m-
2012 State Champion: Michal Filipczak (Park Ridge Maine South) 1:52.01
Key returners: Matt Anyiwo (Jr., Homewood-Flossmoor), Nick Prajka (Sr., Orland Park Sandburg), Danny Gardiner (Sr., Lincolnshire Stevenson), Logan Means (Sr., Chicago Whitney Young), Alex Lima (So., LaGrange Lyons Twp).
Outlook: Perhaps for the first time in IHSA history, the 2013 state finals field will be completely new.  Why? All 12 finalists last year were seniors.  In fact, there were only six non-seniors in the entire state championship lot.  There will be many coaches now changing personnel from other events to fill this void.  It is still highly doubtful that many 400/800 type runners will tap into this event and be ultra successful.  The 800 in Illinois will still remain an event where the 800/miler type dominant as a whole.  So, who might those types be? For starters, let’s throw a curve bar out there.  JOEY SANTILLO.  The Minooka senior appears to be a prime target considering that he has been a strong contributor on the Indians 4×8 relays over the past several years.  Santillo has improved his endurance stock since the summer of ’12- which culminated with a 14:41 effort for three miles.  He also didn’t run the 1600 or 3200 after conference in track last year.  Of course, all of this may be a fairy tell, but why take a stab at it?  Realistically, Anyiwo looks to be a top choice here.  As a sophomore last year, he ran a very gutsy state prelim 1:56 leadoff leg that kept his team’s 4×8 qualifying chances intact for a while.  Anyiwo also competed in the open 800m (1:59) later in the meet.  If he has improved on his aerobic capacity and speed, he could possibly be a successor to Filipczak’s throne.  Prajka is another relay specialist looking to break into the open event.  He ran 1:58 in his sectional race but ditched the event to concentrate on his team’s quest at a 4x8r state title.  It almost paid off for the Eagles who placed fourth.  Don’t be surprised if the Sandburg camp unleashes Prajka to pursue an individual title.  Means may wind up as one of the state’s top half-mile specialists after improving on his long distance stamina.  The fact that he advanced to state in cross country as an individual out of the “sectional of death” known as Niles West means something.  Plus, Means has solid foot speed from running on his team’s deft 4x4r in the past.  He will definitely improve on the 1:57.33 he ran last season. 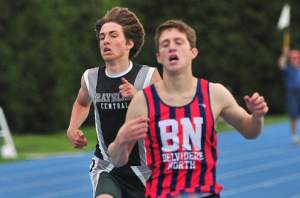 1600m-
2012 State Champion: Leland Later (Winnetka New Trier) 4:09.95
Key returners: Garrett Lee (Sr., Belvidere North), Jack Keelan (Sr., Chicago St. Ignatius), Patrick Perrier (Jr., O’Fallon), Kyle Hauser (Sr., Chicago Marist), Billy Bund (Sr., Lake Forest), Alex Riba (Sr., O’Fallon), Jamison Dale (Sr., Chicago Jones), Micah Beller (Sr., Skokie Niles North).
Outlook: It is a tossup between Keelan and Lee for king of the mile.  Lee narrowly edged Keelan at state 4:15.19-4:15.77 to take fifth over Keelan’s seventh place effort in the 1600m.  However, Keelan got a measure of revenge at the Midwest Distance Festival clocking 4:11.15 [4:09.64] to place fourth and faded Lee 4:12.88 [4:11.30] who ended up in the sixth position.  Both runners should be noticeably better by the end of the year when it counts the most.  O’Fallon ace runners Perrier and Riba will have a say in the overall times during the season.  Both runners have run times in the 4:16s making them the state’s top tandem… Bund may opt out for the 3200m in May but if not count on him running some really fast times that might surprise a few folks… it would be unfair to leave out someone from the 2A state country champion Chicago Jones team.  Yes, the Eagles have strangely moved into the 3A ranks for track.  It won’t matter because their top runner Dale has a personal best of 4:15.97.  He is more than qualified to make a dent among the state’s elite milers.  Keep an eye on Beller this season.  He qualified for state last year but opted out to run on his team’s state runner-up 4x8r.  Lastly, don’t forget about Hauser.  His ninth place finish at state was not a fluke.  The Marist senior backed up his strong spring with an outstanding cross country campaign in which he placed 34th in 14:55