Posted by ilprep on February 19, 2013 in Season Previews

There are mixed opinions on the state of big league sprints in this state depending on who is doing the speaking.  From the elder perspective, it seems like times could be faster but there is no Cahokia or E. St. Louis to push the rest of the state.  However, if you were to speak to many coaches from the new era, they feel that Illinois is on the cusp to being relevant among the nation’s elite sprint corps.  The bottom line is there is room for growth and improvement in all events and that emergence will continue in 2013.

100m-
2012 State Champion: Tavaris Binion (Sr., Darien Hinsdale South) 10.53 [+3.7]
Key returners: Binion, Bennett Gray (Sr., Edwardsville), Jalen Banks (Sr., Harvey Thornton), Julian Hylton (Jr., Frankfort Lincoln-Way North), Kennedy Mayweather (Sr., Collinsville), Chris Wiggins (Sr., O’Fallon).
Outlook: Mayweather was supposed to be the man to beat last year, but instead he ended up finishing dead last in the final.  No one outside of the Cahoks camp really knew what happened.  Perhaps it could have been a heavy workload for the demise.  He ran three tough events but that’s not unusual for a sprinter.  Regardless of what the situation was with Mayweather, he and others will have to contend with the defending champion Binion.  Binion enjoyed a story book season that began as a relative unknown but ending it as a giant slayer.  He will have a ton of confidence in himself knowing that he is the marked man this season.  Gray is probably the most underrated sprinter among the lot.  His former teammate Cameron James grabbed most of the spotlight last year- earning the statesman and focal points last season.  Gray will be the featured speedster who is capable of winning the individual title with a strong start.  Everything is going in the right direction according to a source in the Edwardsville camp.  Others to watch are Banks, Hylton, and Wiggins.  Wiggins ran a personal best 10.72 last season making him a guy to watch this spring.

400m-
2012 State Champion: Antonio Farley (Round Lake) 48.29
Key returners: Kenneth Allen (Sr., South Holland Thornwood), Malik Harrison (Sr., Springfield), Michael Gleeson (Sr., Cary-Grove), Jeff Broger (Sr., South Elgin).
Outlook: Hopefully, this will be the year of the quarter-miler after the event suffered a time drought in 2012 in which only two athletes broke 48.00.  Allen should break the mode and get in the low 47-second range if he doesn’t have to bear a heavy work load.  Remember it was he that ran in back to back events two days in a row in last year’s state championship.  So it was quite astonishing for Allen to place second in 48.33.  Harrison ran 48.50 for fourth place last season.  He expects to be a major threat to Allen in May because he will not have to allure of other events in the way.  Gleeson and Broger will get opportunities to improve on their eighth and ninth place finishes from a year ago.

200m-
2012 State Champion: Darvell Harris (Chicago Dunbar) 21.44 [-1.7]
Key returners: Kennedy Mayweather (Sr., Collinsville), Julian Hylton (Jr., Frankfort Lincoln-Way North), Tavaris Binion (Sr., Darien Hinsdale South), Zach Gordon (Sr., Wheaton North), Keontay Williams (Sr., Zion-Benton), Odell McFarland (Sr., Downers Grove South).
Outlook:  It was the Darvell Harris show and then everyone else last year.  The Chicago Dunbar speedster ran himself into IHSA history in dominating fashion.  He clocked one of the fastest ever for an Illinois sprinter despite windy conditions.  Mayweather was also in that final, but placed a distant third in 22.02.  Expect things to be different now with experience and of course the drive to get redemption.  The field of state finalists will include Hylton-4th, Binion-5th, and Gordon-7th.  There will be one determined sprinter named Williams who will aim to improve and reach the state final in May.  He narrowly missed the final last year despite owning a personal best of 21.90.

110HH-
2012 State Champion: Derrick Willies (Rock Island) 14.02 [+4.6]
Key returners: Derrick Willies (Sr., Rock Island), Miercoles Bell (Sr., Belleville West), Dave Kendziera (Sr., Mt. Prospect [Prospect]), Andrew Helmin (Sr., New Lenox Providence Catholic).
Outlook: The outlook on this event as a whole appears bleak.  The loss of key personnel to graduation and class exodus are the main reasons why.  Willies won his first state title after starting the year as an unknown originally from the state of California.  The most startling thing is that Willies does not like track.  “I don’t like track… not even in the slightest,” he said after the awards ceremony.  But he also acknowledged that track has made him faster and a better athlete.  The thought of racing for silver should please the likes of Bell and Kendziera.  They emerged as solid hurdlers last year and should be able to run in the low to mid 14-second range.  Helmin will add himself to the all-state contender mix too.  He earned top honors in 2A last year.  His school got hit with an enrollment change that bumped him up.  “I have been putting the work [in].  Hopefully, it will pay off,” Helmin recently said in reference to competing against 3A competition. 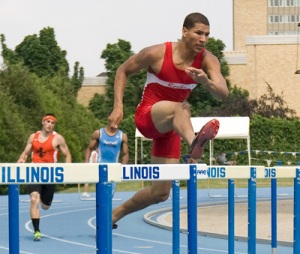 2012 State Champion: Rashad Hulbert (Crete-Monee) 36.91
Key returners: Derrick Willies (Sr., Rock Island), Lino Mogorvic (Sr., Lyons Twp.), Andrew Helmin (Sr., New Lenox Providence Catholic), Connor Dunham (Jr., Chicago St. Ignatius Prep).
Outlook: It appears to be a duplicate affair here with a small returning class.  Before Willies takes flight for the University of Iowa on a football scholarship, he will be determined to etch his name among the all-time greats in this event.  The multi-talented star ran 37.75 in his first state final last fall.  There is no doubt that he will be shooting for the 36s.  There have been only a handful of Illinois long hurdlers who can make this claim.  Helmin will look to earn honors two years in a row, but this time it will be in 3A.  He would have been the top returner had he remained in 2A.