Posted by ilprep on March 6, 2013 in Season Previews

The landscape of the Class A team track and field scene should be a familiar one for the loyal fanbase this spring.  It will more than likely entail Chicago (Leo Catholic) as the team to beat.  The rest of the best could unite and still be chasing the bunch from the far southside of the city.  The Lions may as well be called Stallions because that’s how they will be circling the ovals around the state this season.  Let’s take a brief look into who might walk away with trophies in Charleston in May.

Chicago (Leo Catholic)-
Head coach: Ed Adams
2012 State finish: State Champion 35 points
Key returning athletes: Marlon Britton (Sr.), Theo Hopkins (Jr.), Darrell Johnson (Jr.), Riley McClendon (Jr.), Corey Pryor (Sr.), Joshua Wright (Sr.).
Key events: 4x1r, 4x2r, 4x4r, 100, 200, 110HH, 300H.
Outlook: The calm demeanor of Coach Adams has led his team to two state titles in a row by a single point.  Adams has won six total championships (one as 2A in 2-class system) and may be in line to add a seventh one with some serious firepower returning.  Among his horses in the stable are Britton and Hopkins.  The tandem will continue to be a crucial part of the high scoring 4×1 and 4×2 relays (though the 4×2 didn’t make the finals).  Individually, they will be expected to mature in their main events. Hopkins will be the force to be reckoned with as he mightily improves and replace the graduated Keith Harris in the 100 and 200.  Hopkins placed sixth in both events in Charleston last spring.  Britton is the other half of the Lions attack; he is expected to be the hurdles guru this year.  The Lions will need him to continue his ascent that produced a second place finish in the 110HH. 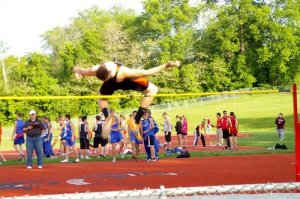 Kyle Landon is #1 in state/berecruited.com photo

If you count Kyle Landon as an individual team then ok… but you can’t.  He has to represent Chester on his jersey.  He/Chester scored 24 points last year to place ninth.  The Yellow Jacket superstar was one of the best high jumpers in the entire country last season.  His 6-11 clearance was the 15th best mark in the US and it won him the state title.  For this year, Landon has stated that he wanted to clear the 7-0 barrier.  That should be within his goal in no time, but it may be the moment to cash in on a dream and take home a team trophy to his school.  Landon placed in the long jump and triple jump as well with fourth and second places respectively.  The 30-point barrier is definitely within reach as well as the bronze trophy if things fall right.

It is uncertain how some of the top teams from a year ago will fall in line after heavy graduation losses.  One thing is for certain will be the emergence of someone or a flock of athletes that will change the team title completion. It will be incredibly hard to expect the runner-up Newton to duplicate another trophy performance after severe graduation losses.  The Eagles do not have anyone to replace Mitch Mammoser’s pole vault points and the invaluable leadership skills that he had.

Also gone is Steve Schroeder from Monticello.  He was the distance force that completed a monster triple in last year’s state championship.  His services and point production will be missed for the Sages.