2013 Boys 2A Sprints and Hurdles Preview

Posted by ilprep on February 11, 2013 in Season Previews

Who is gonna take the weight this season?/Z. Johnson photo

2013 is going to be a great year in the speed department with numerous key athletes coming back.  Look for the Cahokia to rack up on the competition with their tremendous depth.  The Comanches will be seeking their fifth state championship this May.  E. St. Louis Sr. drops in from 3A; it may be the jolt that the Flyers need after struggling as a program over the past several years.  Chicago Public League sprint power North Lawndale Prep also moves into the neighborhood after competing in 3A last season.  The Phoenix appear to be exiting from an emerging program to state power.  If so, expect head coach Zontavious Johnson to finally release his talented individuals on the Class 2A competition. 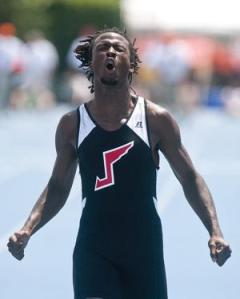 2012 State Champion: Reggie Bratton (Sr., Jacksonville) 10.63 [+2.2]
Key returners: Bratton, Jamal McNeeley (Sr., Chicago Kelvyn Park), Trey Story (Sr., Cahokia), Jonathan Boey (Sr., Decatur MacArthur), Don Hooker (Fr., Sycamore), Terry McGee (Jr., Chicago North Lawndale Prep).
Outlook: The three-sport star Bratton is back to defend his state title… and it may be easier than he thinks if the runner-up McNeeley doesn’t return.  There have been serious rumors flying around the Chicago Public League circles that McNeeley may not run track this season.  In an attempt to seek out McNeeley’s status through his coaches and respected sources, no one has come forward with information.  Watch for Boey to surface as a serious title contender if his injuries from a year ago are healed.

400m-
2012 State Champion: Marlin Brady (Jr., Cahokia) 48.67
Key returners: Brady, Aquintis Williams (Jr., Decatur MacArthur), Trevor Ray (Sr., Lake Villa Lakes), DeShaun Jordan (Sr., Chicago North Lawndale Prep), Imani Payton (Jr., Chicago North Lawndale Prep).
Outlook: Brady may very well be the favorite again this spring, but there is a newcomer named DeShaun Jordan on the horizon.  The Chicago Public League star moves into the neighborhood because of classification changes.  He ran a swift 49.44 in his 3A prelim heat last year but missed the final by one spot.  If he can duplicate that again, he would be a serious threat to score high in the 2A ranks.  However, the Phoenix camp have visions of  Jordan running in the low 48s- good enough to produce a top three finish at state.  Key returners Williams and Ray will make the move in an un-welcomed one for sure.

200m-
2012 State Champion: Jamal McNeeley (Sr., Chicago Kelvyn Park) 22.00 [-1.9]
Key returners: McNeeley, James Jackson (Sr., Jacksonville), Jonathan Boey (Sr., Decatur MacArthur), DeShaun Jordan (Sr., Chicago North Lawndale Prep), Terry McGee (Jr., Chicago North Lawndale Prep).
Outlook: If the reports of McNeeley not returning to defend his state title are true, then all eyes will fall upon Jackson and Boey to be the top dogs.  Boey in particular could be the man to beat if he returns to form.  He reportedly ran 21.10 (FAT) early in the season last spring, but there was no wind gauge to support the accuracy of the time.  Still, he has to be considered a major threat whenever he steps on the track.  Jackson, the defending 100 champ, placed third in state in this event last spring.  He will be looking to gain the top spot in his secondary event.

300H-
2012 State Champion: Elven Walker (Glen Ellyn Glenbard South) 38.41
Key returners: Dylan Nauert (Jr., Maple Park Kaneland), Demario Walker (Sr., Galesburg), Gary Hickman (Jr., Cahokia), Daniel Medrano (Sr., Chicago Brooks), Imani Payton (Jr., Chicago North Lawndale Prep), Marcus Greer (Sr., E. St. Louis Sr.).
Outlook: Nauert, Walker, and Hickman placed sixth, seventh, and eighth at state last year.  But hold on!  The trio will have some serious competition with Payton and his personal best of 39.18 from the 3A ranks.  If Payton’s heavy racing load is lighten a bit during the season, he may be able to put up some serious marks.  He is a skilled and speedy short hurdler that also possesses the strength and endurance to run in the middle 37-second range by the end of the season.  Do Not sleep on Greer either.  He ran 38.94 in 3A last year.  This event will not be lean as it appears by the end of the season.

One comment on “2013 Boys 2A Sprints and Hurdles Preview”