Posted by ilprep on February 7, 2013 in Season Previews 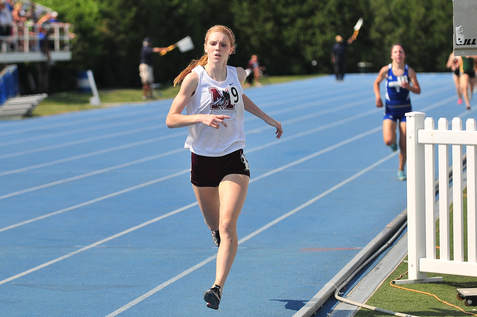 There are going to be a lot of variables that decide what is going to happen in the distance arena this season.   For starters, the classification changes moving athletes and teams from Class 1A to 3A and then in reverse is going to play havoc with the quality of the competition.  Secondly, indoor track vs. outdoor track will be a factor.  It seems like athletes are moving around sports more during the winter and spring seasons- using one season to get in shape or fit for another one.  If these runners don’t play other spring sports like soccer or lacrosse, the distance events will be very deep: Maryjeanne Gilbert (Fr., Peoria Notre Dame), Skyler Bollinger (Fr., Yorkville), Summer Pierson (Fr., Yorkville), Diane Lipa (Fr., Glen Ellyn Glenbard South), Hanna Winter (Sr., Arlington Heights St. Viator).

3200m-
2012 State Champion: Kristen Busch (Freeburg) 10:54.74
Key returners: Katie Adams (Sr., Marengo), Ellie Willging (Jr., Freeport), Stephanie Saey (Sr., Galesburg), Olivia Ryan (So., Oak Park Fenwick), Briana Daley (Jr., Oak Park Fenwick), Sarah Curci (Sr., Chicago University), Sydney Billingsley (Jr., Normal University).
Outcome: Adams was arguably the best distance runner last year. She came into the state championship ready to roll and then THUD!  The University of Iowa signee won the customarily faster heat 2 in 10:57.48.   However, there was one problem.  Freeburg’s Kristen Busch won heat 1 about an hour before in 10:54.74 and was declared the overall champion.  Hopefully, the message has been sent to never take anything for granted.  Ryan competed in the 3A classification for the cross country season and had a monster effort!  She ran 16:43 to place fifth.  If those efforts are any indication to what is going to come, this spring may yield the deepest field in classification history.  No one knows if the cross country champion Victoria Clinton (So., Maple Park Kaneland) is all in for track.  She has competed fiercely in triathlons during the spring and summer.  It is the hope of many distance running fans that she laces up her track spikes and challenge Adams this May. 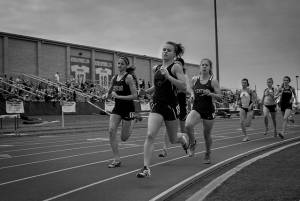 800m-
2012 State Champion: Kelsey Cramsey (Effingham) 2:12.54
Key returners: Michelle Dobbs (Sr., Rochelle), Nicole Choquette (Sr., Urbana), Allie Sprague (Jr., Marengo), Kayla Wolf (Sr., Burlington Central), Isabella Kosier (Jr., Canton).
Outlook: There are five all-state returners on the docket to keep this event stable.  Dobbs could the top choice this year after producing a solid 2:14.33 and placing third in the ’12 final.  Choquette made a name for herself in last year’s state series by popping out of nowhere to produce some of the top marks in the event; she was a prelim heat winner which later proved it wasn’t a fluke.  Choquette dropped a huge personal best of 2:14.38 (4th) in the final.  Sprague is an underrated talent because she trains with perhaps the best overall distance runner in the ranks, Katie Adams every day.  So when it comes to being prepared and sharp for big meets, it wasn’t a surprise to those in the Marengo camp to witness Sprague earning the fifth place medal at state last year.  There is a strong feeling that more can be achieved from Sprague, if she can remain injury-free from foot injury that slowed her this past fall.  Hopefully, the time away from competition as well as treatment is good enough to get her back on track.

1600m-
2012 State Champion: Katie Adams (Sr., Marengo) 5:05.10
Key returners: Adams, Sydney Billingsley (Jr., Normal University), Ellie Willging (Jr., Freeport), Maura Beattie (Jr., Woodstock), Stephanie Saey (Sr., Galesburg), Olivia Ryan (So., Oak Park Fenwick-DNR final).
Outlook: Defending champion Adams will be back one last time to defend her crown assuming that she can stay healthy and hungry all season.  But we all know that the job isn’t complete until it is done on the track against the best competition.  Not to be critical of Adams but she likes to run races safe instead of using her supreme talent to crush foes.  The uber-talented Adams allowed a slow pace to keep Kristen Busch (Freeburg) and Billingsley in it for three laps before speeding away over the final 300.  For instance, Billingsley ran 4:59.12 in her state prelim heat last year.  Billingsley’s run was a thoroughly discussed topic.  It was noted had she kept some fuel in the tank for the final she could have won.  This is a new year so let’s add in a few more players: Willging, Beattie, Saey, and Ryan.  All four of these young ladies have the potential to really do some damage to the seeding charts at the end of the year.  No one truly knows how good Beattie is aside from the DNA that she shares with former great IHSA great sisters Elise and Kayla.  If she is all in for the upcoming season, there may be a different conversation to discuss in May.