Posted by ilprep on January 30, 2013 in Season Previews

There are some folks who think relays are for the fans, as if the coaches that put together fast units are doing it for fun or to supplement their egos.  Yes, it is true that some schools pride themselves in being termed a “relay school.”  But by and large relays serve a greater purpose of scoring points that help teams score crucial points.  In Texas, relays actually count as 20-points in the state championship as to not let a superstar athlete go on a rampage.  The relays in Illinois may be the deciding outcome of the three trophies in May.

4×800 Relay-
2012 State Champion: Breese (Mater Dei) 9:33.49
Key returning units: Decatur (St. Teresa), Erie (coop), Monmouth-Roseville, Teutopolis, Champaign (St. Thomas More).
Outlook: this year’s best overall distance squad could have a different look as defending Breese Mater Dei graduated 3/4ths of their unit including anchor Ellen Toennies.  The spotlight will now be on state runner-up Decatur St. Teresa.  The Bulldogs return three legs of a potentially deadly squad led by cross country state champion Ivy Handley.  The question now will she make a return in the event that her team will be heavily favored or go after individual titles in the 3200 and 1600.  If Coach Todd Vohland can find a replacement leg for Handley (something around 2:20) then it should be a smart move for him to make.  St. Thomas More will be a major threat after competing in the 2A ranks last year.  The Sabres return their entire unit that placed 5th in 9:36.99.  Erie is another team to watch when May arrives.  The Panthers return three legs that ran 9:44 last year. 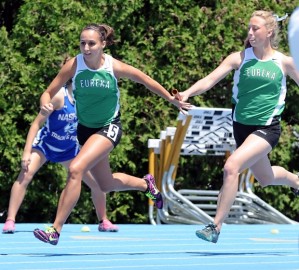 4×100 Relay-
’12 State Champion: South Holland (Seton Academy) 48.51
Key returning units: Seton Academy, Momence, Moweaqua (Central A&M).
Outlook: defending champion Seton return only two legs but one of them is senior workhorse Mykel Adams.  Adams happens to be one of the sprinters in the state this season.  The Lady Sting should enjoy nearly a second and a half cushion over Momence and Central A&M.

4×200 Relay-
’12 State Champion: Sullivan 1:42.82
Key returning units: Sullivan, Sherrard, Port Byron (Riverdale), Erie, Byron.
Outlook: Sullivan will be the favorite after enjoying a record breaking performance in last year’s final.  The Lady Redskins only lose star anchor Paige Neuhauser to graduation. Riverdale will be a threat with four legs.  Keep an eye on Byron and Erie.  They both have units ripe with maturity and deep after placing 6th and 9th respectively.

4×400 Relay-
’12 State Champion: Gibson City-Melvin-Sibley 3:59.22
Key returning units: Central A&M, Mackinaw (Deer Creek), Port Byron (Riverdale), Pleasant Plains.
Outlook: a new champion will more than likely be crowned after GCMS graduated winning quartet.  Central A&M may be the favorite with three legs returning- Taylor Adcock (Sr.) and Kaitlyn Corzine (Sr.) will be key here if the race to determine a state title or trophy come into play.  Riverdale and Port Byron ran under 4:05 last year and will push A&M all the way to the wire.